“The economic liberalisation in India refers to the liberalisation of the country's economic policies with the goal of making the economy more market and service-oriented and expanding the role of private and foreign investment”.

For the developing countries, liberalisation has opened economic borders to foreign companies and investments. Earlier, the investors had to encounter difficulties to enter countries with many barriers. These barriers included tax laws, foreign investment restrictions, acco`unting regulations, and legal issues. Economic liberalisation reduced all these obstacles and waived a few restrictions over the control of the economy to the private sector. The reforms have also been criticised for worsening rural living standards and unemployment and for increasing inequality and concentration of wealth.

Major reform of Liberalisation in 1991 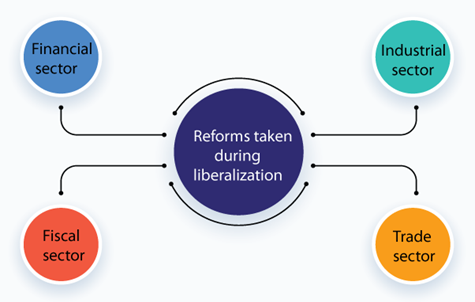 The focus on self-reliance and lack of investment in R&D acted as obstacles to technological development and hence led to the production of inferior quality of goods. There is strong belief that foreign merchandises are superior to Indian goods is still predominant in Indian society. It is well established that the condition of the nation after two centuries of exploitation and a shocking separation must be kept in mind before evaluating the progress of the continual industrial policy. Many factors like lack of tactical skills, low literacy levels, unskilled labour, and absence of technology were significant aspects of Indian economy before independence. It is said that, Industrial plans and policies and their revival has vital role for the economic growth of any country.

Viruses survive in fresh water by ‘hitchhiking’ on plastic: Study