Constitutional Backing to the farmers protest

Farmers’ Rights are currently acknowledged as a global concern, yet consensus on how to implement Farmers’ Rights remains elusive. There is a certain level of acknowledgement worldwide that farmers are an important part of the economic, social and political fabric of society and require support. Growing recognition of farmers’ role in agro biodiversity conservation and innovation is particularly evident. However, there is no agreement on what should be the exact nature, scope and extent of Farmers’ Rights.

Recently, Supreme Court has said that farmers have a constitutional right to continue with their “absolutely perfect” protest as long as their dissent against the three controversial agricultural laws did not slip into violence.This ruling came by the Supreme Court during the hearing of a batch of petitions seeking removal of protesting farmers from the Delhi borders.

The Supreme Court in its verdict has stated that it is the fundamental right of the farmers to protest as long as the protest is constitutional and does not destroy property or endanger life. 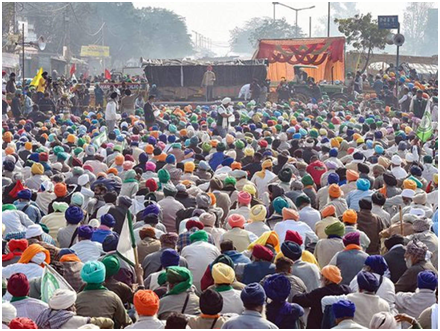 Why are the framers protesting?

The controversy pertains to:

These bills sought to bring much needed reforms in the agricultural marketing system such as removing restrictions of private stock holding of agricultural produce or creating trading areas free of middlemen and take the market to the farmer. However, farmers are apprehensive that the free market philosophy supported by these bills could undermine the Minimum Support Price (MSP) system and make farmers vulnerable to market forces.

Why are only some states protesting?

Issues Raised by the Farmers

The contentious one: FPTC Act

Reasonable restrictions do exist in practice

Intended Benefits Associated with These Bills

What could be negotiated?

How the government should deal with protesting farmers?

A democratic and peaceful protest based on substantive concerns should not be dismissed or discredited for momentary interests of political mileage and electoral expediency. Every ruling dispensation under democratic conditions must strive hard with good faith for constantly prioritising the possibilities of repeated negotiations and consultations for addressing the concerns of the protesting citizens and finding a solution, no matter how vexed the issue in question is.

The Centre must leave no stone unturned for finding a broad consensus around the issue by bringing on board all the stakeholders, including farmers organisations as well as opposition parties in order to resolve the exacerbating crisis, for the interest of the farmers as well as for the larger interest of the nation’s democracy.