In this special report, we will showcase the current issues of marine environment and policies.

What activities are damaging the marine ecosystem? 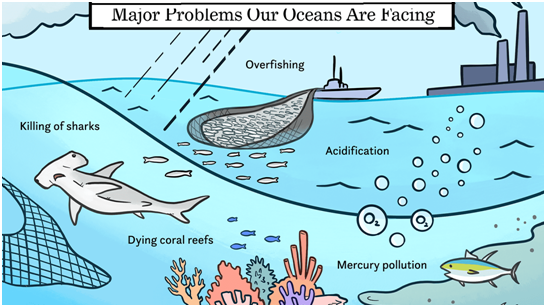 Other causes of Environmental Degradation

The need for Marine Environmental Governance

Conclusion and the Way Forward

It is estimated that even if the island building project is scrapped, it would take decades for the environment to recover. Many Southeast Asian countries have established regional bodies for managing the fisheries in the SCS region.

These bodies include the Asia-Pacific Fishery Commission (APFIC), the Southeast Asian Fisheries Development Center (SEAFDEC), and the Regional Plan of Action to Promote Responsible Fishing Practices (RPOA). However, most of these entities play only an advisory role in policymaking or simply carry out assessment and research related to fishery management.  Most of the agreements that provided for the setting up of these organisations are worded in non-binding language.  They require simply voluntary implementation of the recommendations and leave the execution on co-management and cooperation, which is largely absent.

State of Irrigation in India