In the past few years, the administration has made certain efforts to steer the country towards integrated water governance.

The Report recommended that both the Central Water Commission (CWC) and Central Ground Water Board (CGWB) be dissolved, and in their stead be created a multi-disciplinary National Water Commission (NWC). This is indeed a rational recommendation, given that groundwater and surface water are not separate entities but integral components of the same hydrological system, and therefore need to be governed using a holistic basin ecosystem governance approach. The Report called for a multidisciplinary approach to governing waters through the involvement of social scientists, natural scientists, and professionals from management, and other specialised disciplines. 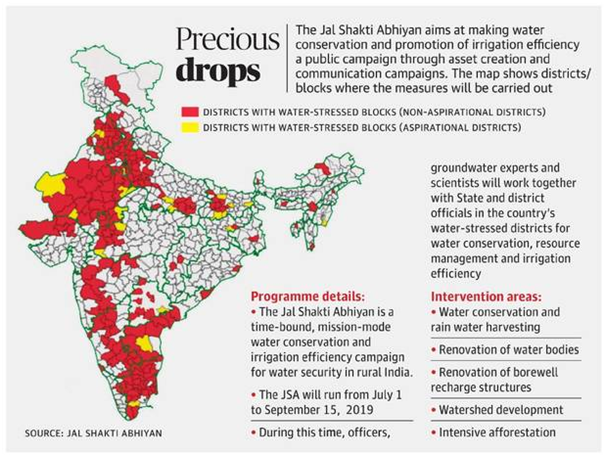 There is enough evidence that the ‘business as usual’ way of managing water has become unsustainable, and would lead to severe stress, and even possibly conflicts between stakeholders. The last few years therefore witnessed the increasingly ubiquitous call for change in the existing visions of managing water. The new thinking entails replacing the reductionist engineering-centred paradigm by a new holistic and interdisciplinary notion.

There is no doubt that the progress of the present civilisation is marked by human ability to build bigger engineering structures that modify the flow regimes through storage and diversion.

Such strategies indeed resulted in impressive successes in providing larger supplies to water-scarce regions. The successes were short-term, though, and over time it became clear that the new and emerging challenges of the future are much more complex than scarcity. Concerns heightened that following a strategy that single-mindedly sought to increase intervention into the hydrological cycle were becoming counter-productive as they led to adverse impacts on basin ecosystems. This brought about the call for a holistic knowledge base, identified as IWRM.

The recognition that there is an imperative for a holistic approach in managing water and governing river basins is reflected in policymaking in different countries. Apart from dam decommissioning, other means to conserve water in stream are being undertaken in various countries across the world.

What can be done for proper Water Governance?

The Indian delineation and action towards food security have been resource-intensive, and was largely based on the reductionist engineering-based approaches of supply-augmentation. The Green Revolution in the late 1960s, introduction of minimum support price (MSP) mechanism in the late 1970s, and governmental procurement policies led to food security being viewed through the lens of production and procurement of two major water-consuming food grains, i.e., rice and wheat. While the Green revolution led to rise in yield levels, the MSPs of the two staples were increased at a much faster rate than the less water-consuming millets in an attempt to promote their production and easy procurement.

MSP acted as a financial derivative instrument for hedging, “put option”: if prices fall below the MSP, there is an option of selling rice/ wheat at the MSP to the state. Over time, MSP became the “floor” price-setter for rice and wheat, as whenever MSPs for rice and wheat were increased by the Commission for Agricultural Costs and Prices (CACP), the traders put across a higher bid, thereby increasing the market prices of the two food grains.

Though agricultural economists argue that this irrigation in India is largely groundwater-dependent, it needs to be kept in mind that groundwater depletion due to overuse is creating pressure on surface flows. At the same time, it is often forgotten that groundwater feeds and sustains the surface flows. Over time, in large parts of southern India, canal irrigation became prevalent, taking a heavy toll on surface flows. Essentially, the “agricultural economic” perspective supported by “reductionist engineering” thinking of water management through constructions of large irrigation projects have accentuated water conflicts all because of a wrong vision of “food security” defined in terms of production and procurement of high-water consuming, and resource-intensive crops. This is in contravention with global scientific literature and best practices that state that water and food security need not have a simple positive-linear relation.

Rather, there are several best-practice-mechanisms of water management that delink the two variables.

The current water governance paradigm that is reliant on structural interventions over water flows has become unsustainable. The existing dispensation of water technocracy appears to have no intention of instituting reforms in policy, and calls for change have been subjected to attacks from the lobby that continue to believe in the status quo.

Such resistance to change needs to be understood from the perspective of deeply entrenched visions of structural interventions to govern rivers that have historical origins in India’s colonial era.

The colonial engineering paradigm that embodied the metabolic rift between human and nature has to be replaced by a more interdisciplinary thinking combining engineering with social and ecological sciences.