In the seven decades since it became an independent country, India has seen and largely welcomed waves of migrants fleeing conflict in neighbouring nations. India in its 70 years as an independent nation-state has seen its fair share of migrant problems. And of course, it started with Partition itself. 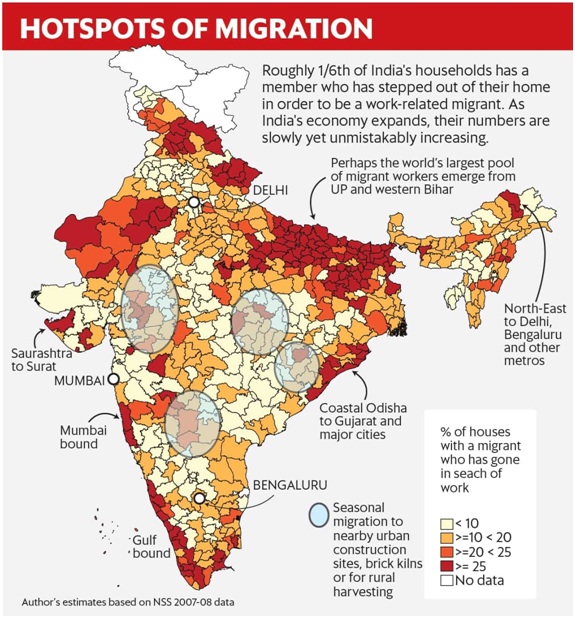 Internal migrant flows can be classified on the basis of origin and destination.  One kind of classification is:

Migration is a global phenomenon caused not only by economic factors but many other factors like social, political, cultural, environmental, health, education are included under the broader classification of Push and Pull factors of migration

The Human Development Report by United Nation Development Programme (2009) highlights that migration is integral to the process of human development and it plays a very important role in achieving sustainable development goals, thereby preventing migration could even be counterproductive.

The United Nations Educational, Scientific and Cultural Organization has highlighted that the policies and programs facilitating the integration of migrants at the destination remain weak at best or non-existent and suggested the inclusion and integration of migrants in development. Hence India needs to formulate migration centric policies, strategies, and institutional mechanisms in order to ensure inclusive growth and development and reduce distress induced migration, thereby increasing India’s prospects for poverty reduction and achieving Sustainable Development Goals.

The government at Centre needs to provide amenities and social securities for the migrant population which is riddled with the issues of inadequate housing; low-paid, insecure or hazardous work; extreme vulnerability of women and children to trafficking and sex exploitation etc. For instance, schemes like Kerala government’s Aawaz health insurance scheme, ApnaGhar project -accommodation for migrant workers, Portable Rights- ensures the basic rights to workers in their respective home state, even as they labour in other states.

War of Attention: Impact of Social Media on the Armed Forces