Countries around the world are taking steps to tackle climate change and become net zero emitters of carbon dioxide by 2050. The most recent Joe Biden’s presidential election win could signify that the United States of Americacould become the latest nation to adopt the goal of becoming net zero carbon dioxideemitter by 2050.

Net zero describes the point in time where humans stop adding to the burden of climate heating gases in the atmosphere. Therefore, in net zero scenarios, emissions are still being generated but they’re offset by the same amount elsewhere. Examples of offset activities include planting trees to absorb carbon dioxide or using other natural ecosystems to increase carbon stored in the biosphere.The concept of net zero emission is similar to “climateneutrality.”

To understand the term “net zero emissions”, we must also understand what it is not. Zero emissionrefers to a process where no carbon dioxide is released at all. In fact, in our current global mining and manufacturing system, no technology produces zero emissions.

Technologies such as solar panels and wind energy are often said to be zeroemissions but technically, they’re not. They have what are known as “embedded emissions” i.e. those created in manufacturing the technology. However,wind and solar energyproduces no on-going emissions after installation, unlike fossil fuel energy.

Technologies generating greenhouse gases at a lower rate than the normal emissions could be referred to as low emission technologies. Examples include switching from coalfired to gasfired power to generate the same amount of electricity, but with fewer emissions.

Under the Paris Agreement, countries had agreed to limit the warming well below 2 degree Celsius and ideally 1.5 degree Celsius. Climate impacts that are already unfolding around the world, even with only 1.1 degree Celsius of warming, range from melting ice to devastating heat waves and more intense storms, andexemplify the urgency of minimizing temperature increase to no more than 1.5 degreeCelsius. The latest reports suggest that to meet the Paris Agreement's temperature goals, the world will need to reach net zero emissions on the following timelines:

The sooner these emissions peak, and the lower they are at that point, the more realistic it would be to achieve net zero in time. Further, the world would also need to rely less on carbon removal in the second half of the century. The time frame for reaching net zero emissions differs significantly if one is referring to carbon dioxide alone, or referring to all major greenhouse gases(including methane, nitrous oxide, and hydro fluorocarbons). For non-carbon dioxide emissions, the net zero date is later because some of these emissions are comparatively more difficult to phase out,such as, methane emission from agricultural sources. However, these potent but shortlived gases could drive temperatures higher in the nearterm, and push the temperature change above the 1.5 degree Celsius threshold much earlier. 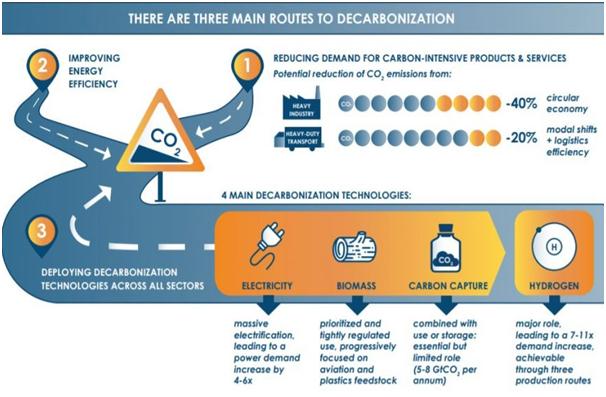 A lot of countries are talking about “going net zero” lately. China recently announced it intends to achieve the goal by 2060. Further, France, the United Kingdom and New Zealand have proposed to go net zero by 2050. Similarly, all states and territories in Australia have prepared a net zero strategy and the federal government has been put under pressure to make a national commitment.Correspondingly, it’s not just the countries that could produce net zero emissions; the term could also apply to a state, city, company or even a single building.

Since the countriesvary widely on stages of development and economies, there is no onesizefitsall timeline for individual countries. However, there are hard physical limits to the total emissions the atmosphere can support while limiting global temperature increase to the agreed goals of the Paris Agreement. At the very least, major emitters (such as the United States, the European Union and China) should reach net zerogreenhouse gas emissions by 2050, or it could be hard to control the temperature rise,given that the largest economies play an outsize role in determining the trajectory of global emissions.

There needs to be inclusion of major policy, technology and behaviour shifts to achieve Net zero Emissions.For example, in pathways to 1.5 degree Celsius, renewables should supply 70 to 85% of electricity by 2050. Energy efficiency and fuel switching measureswould be critical for transportation. Improving the efficiency of food production, changing dietary choices, halting deforestation, restoring degraded lands, and reducing food waste would also have significant role for emission reduction.

Further,it is critical that the structural and economic transition necessary to limit warming to 1.5 degree Celsius is approached in a just manner, especially for workers tied to high carbon industries. The good news is that most of the technologies needed to reduce emissions are available and they are increasingly becoming cost competitive apart from facilitating alternatives to high carbon. Solar and wind energy sources now provide the cheapest power for 67% of the world. Markets are waking up to these opportunities and to the risks of a high carbon economy, and shifting accordingly.

Additionally, investmentswould be needed to be facilitatedfor carbon removal. Removing carbon dioxide from the atmosphere would be necessary to compensate for emissions from sectors in which reaching zero emissions would be more difficult, such as aviation sector. Carbon removal could be achieved by several means, including land based approaches (such as restoring forests and boosting soil uptake of carbon) and technological approaches (such as direct air capture and storage, or mineralization).

Additionally, there could beother key ways to move to net zero emissions, which are also reflected in most national plans:

The Paris Agreement has a long term goal of achieving "a balance between anthropogenic emission by sources and removal by sinks of various greenhouse gases in the second half of this century, on the basis of equity, and in the context of sustainable development and efforts to eradicate poverty." The concept of balancing emissions and removals is similar to reaching net zero emissions.

Coupled with the ultimate goal to limit warming well below 2 degree Celsius, and aiming for 1.5 degree Celsius, the Paris Agreement commits governments to sharply reduce emissions and ramp up efforts to reach net zero emissions in time to avoid the worst consequences of climate change. The Paris Agreement framework also invites countries to submit long term, low emissions development strategies by 2020. These strategies could be a medium for setting net zero targets and charting out how countries could aim to make such transitions.

Commitments to create bold short and long term targets that align with a net zero emissions future would send important signals to all the levels of government, to the private sector, and to the public that global leaders are building a safe and prosperous future, rather than one devastated by climate impacts.

Carbon Neutral is a term used to describe the state of an entity (such as a company, service, product or event), where the carbon emissions caused by them have been balanced out by funding an equivalent amount of carbon savings elsewhere in the world. The term “carbon neutral” is sometimes used instead of net zero, and broadly they mean the same thing. There are also two specific categories of carbon neutral technologies that are relevant:

Carbon neutrality is often achieved through fundingprojects beneficial toclimate to make up for the greenhouse gases they emit. Such outside projects used as mitigation for greenhouse gas emissions are commonly called “offsets,” since they’re used to offset the emissions of the person or company who buys them. 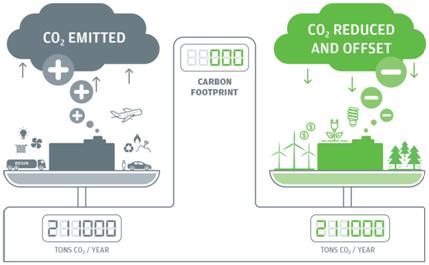 Roadmap for a Climate Neutral Economy

To meet the goal of achieving a zero carbon footprint, following strategic building blocks could be pursued: 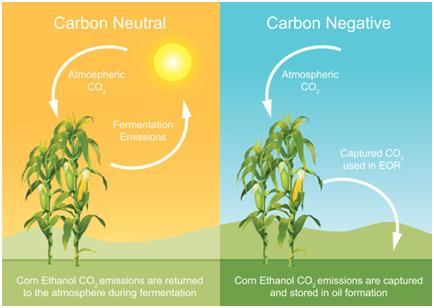 Carbon Negative and Climate Positive are interchangeable terms.Climate positive?means that an activity goes beyond achieving net zero carbon emissions to actually create an environmental benefit by removing additional carbon dioxide from the atmosphere.The benefit of climate positive initiatives is the spillover benefits they create for other people, companies, or localities that may not have the means or initiative to reduce their own carbon footprints. Ideally, carbon neutrality will become the eventual standard across the board, climate positive initiatives can, in the meantime, help pick up some of the slack.

A ‘carbon positive’ building takes the various strategies a step further by producing more energy than it needs and feeding that energy back into the grid. Carbon positive?moves beyond carbon zero by making additional ‘positive’ or ‘net export’ contributions by producing more energy on site than the building requires and feeding it back to the grid. Carbon positive projects can make significant contributions by helping to address the carbon intensity and damaging impacts of past building practices and lifestyles, and by offsetting situations where carbon zero buildings are not possible. 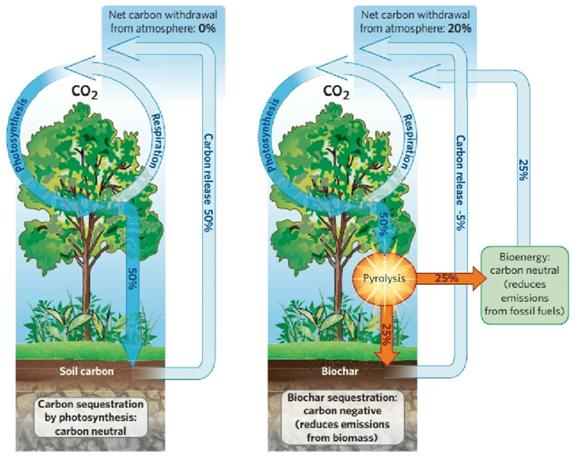 Out of all the sustainability concepts described above, efforts could vary depending on where you are now and what your priorities are in the short, medium and long term. The short term target may be to achieve ‘Low Carbon’ at first; and then the medium term target may be to achieve Net Zero Energy or even Carbon Neutral Status – and then a longer term strategy may be to work towards achieving Carbon Positivestatus.

Governments have placed a significant emphasis on achieving Net Zero Emissions by 2050 – which is about achieving a balance of naturally occurring greenhouse gases versus greenhouse gases caused by human and industrial activity. But we can’t stop there – there needs to be movement ‘beyond net zero’ which ultimately means achieving carbon positive or climate positive outcomes across the board.