The consortium behind the Russia-led Nord Stream 2 natural gas pipeline has resumed laying pipes in the waters of Denmark, despite mounting pressure on the project from Washington. 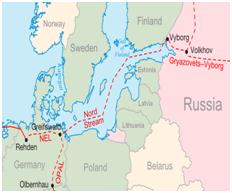 Why the pipeline is controversial?

What is Einsteinium, the mysterious element named after Albert Einstein?

Climate Finance, to be a key part in COP26

Looking at the positive side of Viruse

Demand for Healthcare revived in Rajasthan

Why did the ancient Indian republics need recognition for their place in the history of the world?