Priorities Biodiversity to Prevent the Next Pandemic

From the most remote terrestrial wilderness to the most densely populated cities, humans are inexorably changing the planet. We have put millions of animals at risk of extinction, degraded vast habitats, polluted the air and water resources, destroyed forests and coral reefs, exploited wild flora and fauna, and fostered the proliferation of invasives. Above all,the human beings have caused a global climate crisis.

This planetary neglect and mismanagement helped pave the way for the COVID-19 pandemic. The disruption of natural ecosystems has escalated health crises, including a rise in zoonotic diseases which arise when pathogens pass between animals and humans. There is no excuse for humanity to drive these aforementioned devastating changes.

To prevent the trigger of the next pandemic, and to address several health challenges, we must ensure the biological integrity of the planet for current and future generations. Countries and governments across the world must work not only to prevent, monitor, and reduce disease, but also to prioritise the conservation of biodiversity. 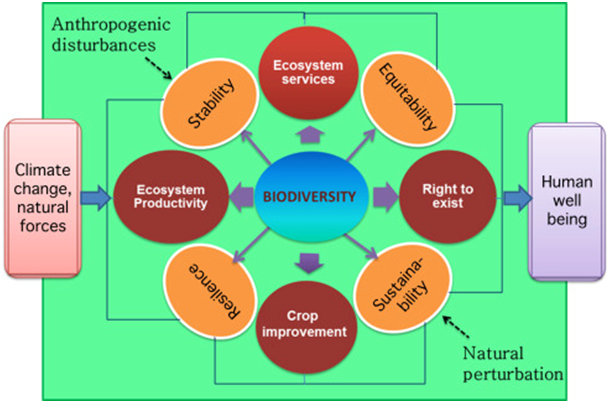 Biodiversity could be defined as a community of all the living organisms on the earth and the diversity among them. Therefore, biodiversity is the variability between the species, within the species, and between the ecosystems.The term ‘biodiversity’ was coined by Walter G. Rosen in the year 1986.The term “biodiversity” was popularised by socio-biologist Edward Wilson in 1988. He came to be popularly known as the Father of Biodiversity.

The importance of biodiversity could be elaborated in the following points:

Biodiversity could be categorized into three main types:

The decline of species and the degradation of ecosystems, coupled with the increase in encroachment of people and commercial activities into the planet’s remaining wild places, have provided greater opportunities for diseases to spill over from animals to humans on a global scale. In the case of COVID-19, scientists have agreed that a bat species from Asia was likely the ancestral host of SARS-CoV-2, the virus that causes COVID-19.

Extensive commercial use of wildlife for human consumption and illegal wildlife trade is often a culprit creating human-wildlife interfaces that could have promoted the evolution of the virus and ultimately facilitated the transmission to humans. Apart from COVID-19, we have SARS, bird flu, Ebola, Swine flu, Rabies, West Nile virus, Nipah virus and MERS that are known to be spread by wildlife.

Wildlife has natural resistance against many bacteria and viruses. This is the reason that many animals living in the zoo do not survive once they are released in the wild. Humans are increasing in numbers and expanding their habitation towards the forests. This has led to an increase in the number of animals culled for meat, medicine, aphrodisiac, fur coats and shawls, and even as trophies for decorating the houses of rich people. For example, increased medicinal demand drives the trade for rare animal parts such as tiger bones, rhinoceros horn and pangolin scales all of which are used in traditional Chinese medicine. The Golden Triangle Special Economic Zone situated on the border of Thailand, Laos and Myanmar, openly sells ivory and tiger skins with many other critically endangered animals on the menu.

This increasing interaction of humans with wild animals has brought several diseases to the doorsteps of humans. There are many more viruses harboured by wildlife. To prevent instances of viruses from wild animals jumping to humans and creating the kind of havoc that we have been experiencing, there is a need to crack down hard on illegal wildlife trade. We have to encourage the tradition of living in harmony with wildlife and forests. Food habits need to be improved through awareness programmes so as to reduce the pressure on wildlife.

In simplest terms, conservation is the careful preservation, protection and efficient utilisation of resources.Conservation of biodiversityrefers to protecting the millions of different species that live on our planet and protecting the multitude of different ecosystems that allows these organisms survive and evolve. Whatever we do to protect the number and variety of plants and animals is known as conservation of biodiversity.There are two major methods for Conservationof Biodiversity:

The Government of India has taken various steps to conserve the degrading biodiversity.

The Centrally Sponsored Scheme Integrated Development of Wildlife Habitatshas been modified by adding a new component called Recovery of Endangered Species and 16 species have been identified for recovery. These include Hangul in Jammu and Kashmir, Snow Leopard in Jammu and Kashmir, Himachal Pradesh, Uttarakhand and Arunachal Pradesh, Vulture in Punjab, Haryana and Gujarat, Swiftlet in Andaman and Nicobar Islands, NilgiriTahr in Tamil Nadu, and Sangai Deer in Manipur. Apart from these,Bustard (including Floricans), Dolphin, Marine Turtles, Dugong, Asian Wild Buffalo, Nicobar Megapode, Manipur Brow-antlered Deer, Malabar Civet, Indian Rhinoceros, Asiatic Lion, andJerdon’s Courser are also included in the list and government has to spend huge amount of moneyfor the recovery of endangered species.

Financial and technical assistance is also extended to the State Governments under various Centrally Sponsored Schemeslike Project Tigerand Project Elephant, apart fromIntegrated Development of Wildlife Habitatsfor providing better protection and conservation of wildlife.The Central Bureau of Investigation (CBI) has been empowered under the Wild Life (Protection) Act, 1972 to apprehend and prosecute wildlife offenders.The State Governments have been requested to strengthen the field formations and intensify patrolling in and around the Protected Areas.

Berlin Principles on One Health (2019)

Shortly before the emergence of COVID-19, the Wildlife Conservation Societyissued “The 2019 Berlin Principles on One Health,” as a part of a conference hosted by the government of Germany which was attended by global health and conservation leaders. The concept of “One Health” calls for promotion of ecosystem health and integrity while addressing the issues like climate change, antimicrobial resistance, and pandemic preparedness. It advocated for global stakeholders to take actions such as

In short, the “One Health” approach acknowledges the inseparability of human, wildlife, and ecological health, and recognises that, to achieve optimal health outcomes for all, we must have a collaborative, dynamic, and trans-disciplinary approach at all levels. 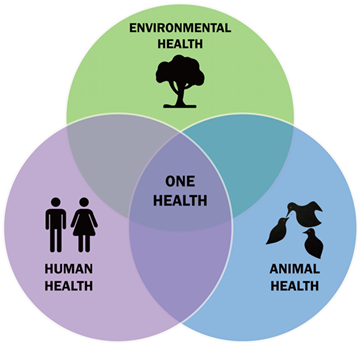 Challenges and Issues faced during conservation of biodiversity

There is a huge diversity of flora and fauna which itself is a challenge for protection. Majority of these have not even been discovered. Further, identification of the interaction between these flora and fauna with the environment and other components of ecosystem are beyond impossible.

The expanding human population is a major challenge to conservation of biodiversity. People use biodiversity to fulfil the basic needs and desires. Greater the population, higher would be the exploitation of the biodiversity. It becomes difficult to maintain the balance and proper use of ecosystem with growing population. Since the close of World War II, the global population has more than tripled to roughly 7.8 billion people, and the world has become increasingly interconnected. Globalisation has brought tens of millions of people out of poverty and enhanced human lifespan and the quality of life. However, the destruction and exploitation of ecosystems, greed, and indifference to the human and environmental consequences of these activities have paved the way for the current crises.

Additionally, the failures in the management of the COVID-19 pandemic have made it clear that it wouldn’t be a cakewalk to conserve and protect our biodiversity and it would be much harder to put the Berlin principles of One Health into place. Some of the thesocio-political events such as turn towards nationalism and isolationism, a simmering distrust in science, widespread disinformation, and a pervasive misperception that health and the environment are at odds with economic stability and human wellbeing are some of the major upcoming impediments to building a healthier planet. 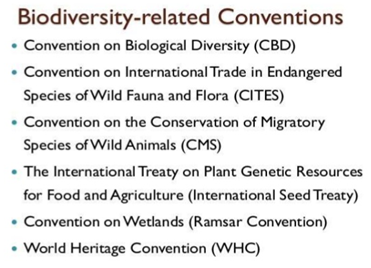 At the national level, integrating biodiversity conservation strategies into agriculture, fishery, and forestry management could minimize negative impacts on biodiversity and encourage sustainable harvesting.Practices such as integrated pest management, some forms of organic farming, and protection of field margins, riparian zones, and other non-cultivated habitats within farms could promote synergistic relationships between agriculture, domestic biodiversity, and wild biodiversity.Tropical deforestation at a local level could be controlled most effectively when the livelihood needs of local inhabitants would be addressed within the context of sustainable forestry.

Species management approaches could be effective where the goal is species conservation, and where the specific population could be managed directly. However, managing a single species is rarely effective when the goal is to stabilise the ecosystem functioning. Multiple species management could be the appropriate approach in such a scenario. Management of invasive species is important to protect the degradation of biodiversity. Successful management would require identification of specific biological features of the target species (for example, poor dispersal ability), early detection/response, facilitating sufficient economic resources for a sufficient duration, and widespread support from the relevant agencies and the public.

Combatting the biodiversity, health, and climate crises is not a zero-sum game. It is vital that governments work collaboratively on all three fronts to prevent the next global pandemic. Urgent action must be taken to retain the essential health links between humans, wildlife, domesticated animals and plants, and all of nature. We must ensure the protection and conservation of biodiversity that is interwoven with functional ecosystems and provides for the foundational infrastructure of life, health, and well-being on our planet. A key element would be multilateral and multidisciplinary collaboration. No one country, group, discipline, or sector of society holds enough knowledge and resources to single-handedly prevent the emergence or spread of global diseases. The private sector could make significant contributions to biodiversity conservation. A greater collaboration between NGOs and businesses would be vital to explore ways to reduce harmful trade-offs and identify positive synergies that could lead to effective sustainable management practices.

Biodiversity underpins current and future human health, well-being and economic prosperity. It is therefore critical that countries integrate biodiversity considerations into their COVID-19 response and economic recovery plans. The emerging infectious diseases should be minimized by controlling land-use change and wildlife exploitation which increases risk of contamination by bringing people and domestic animals in close proximity to pathogen-carrying wildlife, and by disrupting the ecological processes that keep diseases in check.

Governments could take the following steps to integrate biodiversity considerations into the COVID-19 recovery plans, and drive the transformative changes needed to halt and then reverse biodiversity loss:

The responses to conserving biodiversity would not work in a vacuum. A wide variety of enabling conditions which should be a combination of instrumental freedoms and institutional frameworks would play a critical role in determining the success or failure of our endeavor towards the conservation of biodiversity. As the world is recovering from the COVID-19 pandemic, business as usual should not be the order of the day. We could no longer afford to ignore our inter-connectedness with the ecosystems around us for the sake of narrow interests or short-term economic gains. Unless we fully embrace the inevitable necessity for the conservation of biodiversity, we cannot prevent the next pandemic of zoonotic origin. The world ought to be built around a global, integrated, multilateral, and all-inclusive approach to wellbeing.

While government and business leaders have acknowledged the importance of a “green recovery”, the focus has been predominantly on climate change. Yet biodiversity loss and climate change are challenges of a similar magnitude and urgency and are fundamentally interlinked. They must be addressed together as part of a broader green and inclusive recovery. Nature is in crisis and failure to act is failing humanity. Addressing the current coronavirus pandemic and protecting ourselves against future global threats requires sound management of hazardous waste; strong and global stewardship of nature and biodiversity; and a clear commitment to “building back better”, creating green jobs and facilitating the transition to carbon neutral economies. Humanity depends on action now for a resilient and sustainable future.