Heavy metals are commonly defined as those having a specific density of more than 5 g/cm3and adversely affect the environment and living organisms.Heavy metals are elements that are naturally found in the earth. Examples include lead (Pb), chromium (Cr), arsenic (As), zinc (Zn), cadmium (Cd), copper (Cu), mercury (Hg), and nickel (Ni). They are used in many modern-day applications, such as agriculture, medicine, and industry.

Heavy metals have been used in different areas for thousands of years. For example, lead has been used for at least 5000 years, early applications including building materials, pigments for glazing ceramics, and pipes for transporting water. In ancient Rome, lead acetate was used to sweeten old wine, and some Romans might have consumed as much as a gram of lead a day. 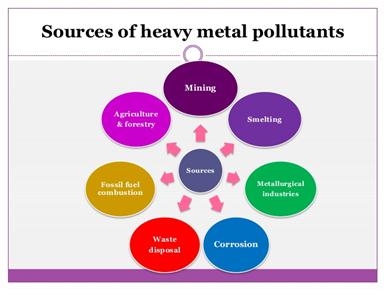 Need for Remediation of Heavy Metals

The presence of heavy metals released from various sources is either directly or indirectly released into the environment that affects humans, animals, and plants. The main pathways of exposure are through inhalation, ingestion, and dermal contact. Due to increased risk of human exposure to heavy metals, it leads to serious health implications and environmental deterioration. The severity of adverse health effects differs with the type of heavy metal, the chemical form, time of exposure, and the dosage. These heavy metal contaminants in soil were also reported to affect the ecosystem by disturbing the food chain, reducing the food quality due to phytotoxicity, loss of soil fertility etc.

In India, the heavy metal concentration in industrial areas is much higher than the permissible level as reported by World Health Organization (WHO), thus exposing humans to occupational hazards. This scenario of the serious health hazards due to heavy metal pollution can be contributed to negligence of the industries in the form of direct discharge of untreated effluent into environment, failure to imply strict regulations by government environmental protection agencies in developing countries, and the non-reliability of the present individual remediation methods toward in situ and large scale applications.

Types of Remediation of Heavy Metals

Heavy metals have been reported to be removed by various physical methods comprising treatment of polluted system using physicochemical properties of the metals, which include adsorption, electro-kinetic method, membrane filtration, granular activated carbon, photocatalysis and soil washing. Some of these have limitations such as cost, time consumption, logistical problems, and mechanical involvedness.

The chemical process includes chemical precipitation, floatation, ion exchange, coagulation and flocculation. These techniques are efficient for the removal of heavy metals, but the excessive use of chemicals causes the difficulty in sludge disposal and the possibility of a secondary pollution problem.

Bioremediation is a type of waste management technique and one of the vital technologies utilized to detoxify the harmful form of metals to its less harmful state using microbes or its enzymes to purify the contaminated environment. It is an environmentally friendly and cost-effective approach as it occurs through natural processes for the revitalization of the environment. However, bioremediation of heavy metals has some limitations. Among those are the production of toxic metabolites by microbes and non-biodegradability of heavy metals. Heavy metals cannot be eliminated during bioremediation but can solely be changed from one organic complex or oxidation state to another. This method uses microorganisms or plants or combination of both for the management of contaminated systems. Microorganisms have developed numerous strategies for their survival in heavy metal-polluted habitats; they develop and adopt different detoxifying mechanisms such as biosorption, bioaccumulation and biotransformation. The response of microorganism to heavy metals depends on the concentration and availability of heavy metals and is an interconnected process, which is controlled by several factors such as metal type, nature of medium and microbial species.

Phytoremediation is a cost-efficient plant-based approach that takes advantage of the ability of plants to concentrate elements and compounds from the environment and metabolize various molecules in their tissues. It refers to the natural ability of certain plants to bioaccumulate, degrade, or render harmless contaminants in soil, water, or air. Toxic heavy metals and organic pollutants are the targets for phytoremediation.Water hyacinth and Salvinia are fast growing, weeds. Their higher productivity and resilience i.e. ability to accumulate very large amount of toxic substances (viz. heavy metals) make them ideal macrophytes for wastewater treatment (secondary and tertiary waste water treatment).

The plants exhibiting phytoremediation should have following characteristics:

Phytoremediation is usually applied to contaminated soil or water environments that are static. Some of the examples include the restoration of abandoned metal mine workings and sites where polychlorinated biphenyls have been dumped during the manufacture and mitigation of ongoing coal mine, discharges reducing the impact of contaminants in soils, water, or air.Phytoremediation is an important part of the new field of ecological engineering. Organic and inorganic wastes include metals and metalloids, some xenobiotic contaminants, and salts leachate, sewage, sludge, and other conventional wastes.

Contaminants such as metals, pesticides, solvents, explosives, and crude oil and its derivatives, have been mitigated in phytoremediation projects worldwide. Many plants such as mustard plants, alpine pennycress, hemp, and pigweed have proven to be successful at hyper-accumulating contaminants at toxic waste sites.Not all plants can accumulate heavy metals or organic pollutants due to differences in the physiology of the plant. Even cultivars within the same species have varying abilities to accumulate pollutants.The following plants are best for phytoremediation - Indian mustard, Willow, Poplar tree, Indian grass, Sunflower, etc. 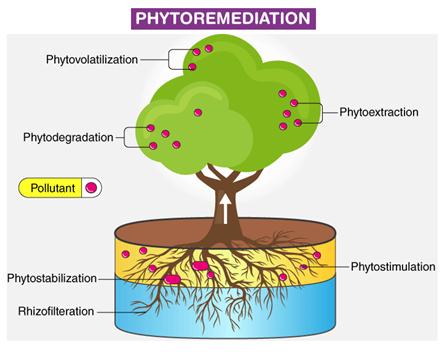 Biochar is a carbon-rich, stable and recalcitrant product that has been used by farmers, for enriching soil quality, since ages. Biochar is derived from thermal treatment of any type of biomass or carbonaceous feedstocks. All types of biomass could be used for producing biochar. A wide variety of feedstock biomasses have been used for the production of biochar, such as kitchen waste, agricultural waste, forest residues, bioenergy crops, sewage sludge, animal litter and even algae. It must be mentioned that using waste biomass for the production of biochar can help in the reduction of waste generation thereby assisting in waste management. Additionally, there will be a reduction in the number of landfill sites because of the lesser size of waste generated. Further, reduction in waste will help in enhancing the sanitation levels across the world and the groundwater will not get contaminated.

The various thermal treatments for producing biocharinclude torrefaction, combustion, carbonization, gasification, and pyrolysis. Pyrolysis is the most preferred method of biochar production because of the simplicity and efficiency of the process.The process of pyrolysis involves heating the biomass in a temperature range of 300°C-900?C in the absence of oxygen.Depending upon the heating rate used, pyrolysis could be divided into slow, intermediate or fast pyrolysis.

Interestingly, biochar must not be confused with Terra preta. Terra preta is also called “Amazonian dark earth”. It is a type of dark-coloured soil abundant in the Amazon basin. It is fertile in nature and is produced artificially by mixing low-temperature charcoal with manure, compost, faeces, bones, and plant residues. Terra preta differs from biochar not only in composition, but also in carbon structure. 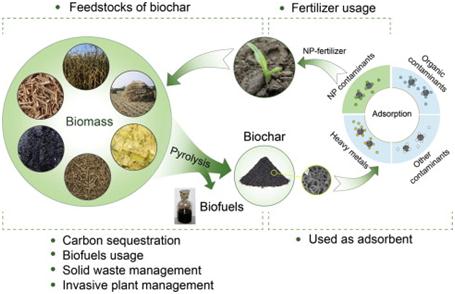 Other applications of biochar

Biochar production gives us an excellent alternative to overcome the menace of waste generation. Waste biomass (such as municipal solid waste, paper mill waste, animal manure, crop residues, food processing waste and kitchen waste) can be used for the production of biochar. This would not only be economical but simultaneously beneficial by making waste profitable. Further, immobilization of heavy metals helps in a reduction in pollution caused because of them and the resulting contamination. Additionally, pyrolysis kills the harmful microbial population present in the waste biomass particularly sewage sludge and animal manure. This reduces the associated environmental and ecological health impacts.

This is done so by the process of carbon sequestration. The carbon, which constitutes the biomass feedstock, gets converted into a more stable form when the biomass is pyrolyzed into biochar. Carbon dioxide, absorbed during photosynthesis, would no longer be released into the atmosphere by plants, but remain bound to biochar, thereby prohibiting the release of carbon dioxide into the atmosphere. Studies show that biochar can decrease methane emissions from soil by its sorption on the surface of biochar.Further, biochar increases pH of soil which can affect microbial activity and help in suppressing methane emissions.Studies also show that biochar can decrease nitrous oxide emissions from soil by biotic and abiotic mechanisms.

Further, bioenergy i.e. bio-oil and syngas, produced along with biochar during the process of pyrolysis, would tackle the problem of over-exploitation of fossil fuels.Lesser fossil fuels would be burnt thereby avoiding greenhouse gas emissions and helping in climate change mitigation.Further, pyrolysis of the waste biomass, for biochar production, helps in avoiding such greenhouse gas emission thereby assisting in mitigation of climate change.

Biochar has high carbon content making it an excellent soil conditioner. The increase in organic content elevates soil water retention capacity. A reduction in nutrient leaching by application of biochar has also been reported.Further, biochar has an alkaline pH which helps in neutralizing the acidic soils and thereby aids enhancement of plant productivity.Additionally, soils amended with biochar increases microbial population thereby boosting microbial activity. Interestingly, biochar could havepositive, negative or neutral effects on earthworms. Furthermore, the application of biochar with fertilizer multiplies crop yield.It has been reported that biochar can slow the release of minerals when applied along with fertilizers.Lastly, biochar enriches the process of composting.

The process of pyrolysis produces different amounts of biochar, bio-oil and syngas depending upon the temperature used for pyrolyzing biomass. Fast pyrolysis of biomass produces more of bio-oil and less of biochar. During the pyrolysis of biomass, the emissions (air pollutants) that are released could potentially be captured and condensed into bio-oil, a source of bioenergy. Bio-oil would serve as an alternative to fossil fuels and would be associated with lower carbon emissions. Additionally, biochar could be used as a catalyst for the production of biodiesel.

It has been stated that soils contaminated with petroleum can be effectively remediated by adding biochar. Biochar selectively absorbs crude oil from oil/water biphasic mixtures thereby mitigating oil spill.Biochar can be used for efficient dye removal and degradation. Further, biochar can be characterized for specific purposes such as cost-effective hydrogen sulphide removal from biogas. The specificity of biochar may be enhanced by simple modifications. For example, magnetic biochar has been produced which can be easily recovered using an external magnetic field and exhibit greater ability to remove pollutants. 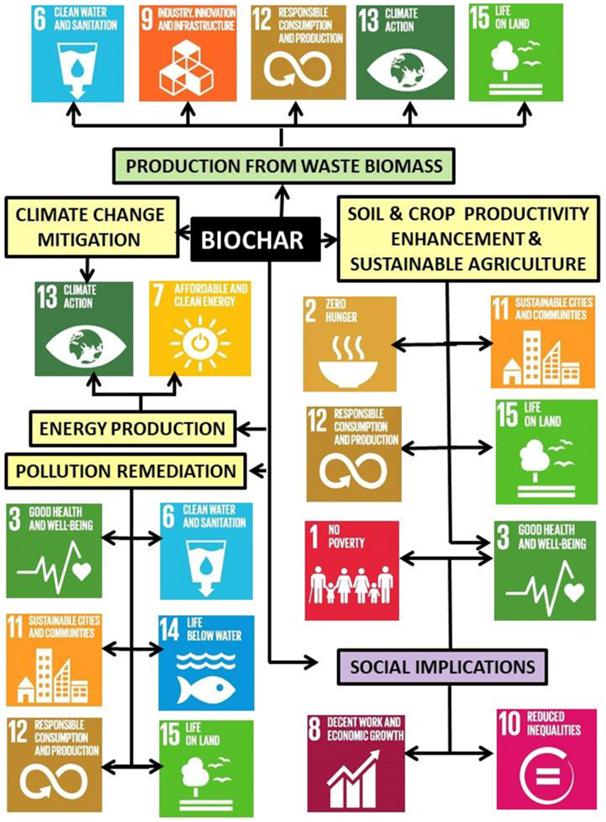