Role of UN Security Council in international peace and Security

“We the people of UNs determined to save succeeding generations from the scourge of war”- The preamble of Charter of UN directly shows its main motive for the peace and security in the world.

UNSC, which came in existence in 1945 after the WWII, has main role in maintaining peace and security. Its central mission is to maintain International Peace and Security.

It helps in preventing conflict; helping parties, in conflict, make peace; peacekeeping; creating the conditions to allow peace to hold and flourish.

Under chapter VII of the charter, the SC can take enforcement measures to maintain or restore international peace and security. Such measures range from economic sanctions to international military actions. The council also establishes UN peacekeeping operations and special political Missions.

The multinational resolutions set out the mission’s mandate and size for UNSC.

Methods to maintain International Peace and Security by UN

Some of the initiatives toward international peace and stability

Some of the achievements of UNSC

British historian Paul Kennedy said –“glancing failures had not only accompained the UN’s many achievements, they overshadowed them”. Having a record of successful operations across the world, the UNSC is also grappled with some shortcomings. They could by as under

Silk Route and its significance for the world 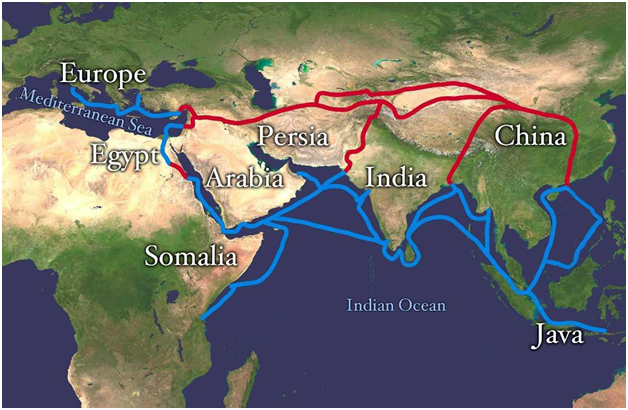 The term "Silk Route" was first used by German geographer Ferdinand Von Richthofen in 19th century when he referred to an ancient trunk road crossing in Central Asia. This Great Silk Route, the first Trans -continental trade and diplomatic road in the history of mankind, connected China and the Far East with Europe and India passed through Central Asia covering 6,400 kms.

The Silk Route was a network of roads, which followed the wide and varied contacts between the peoples of the Mediterranean countries, Near and Middle East, Central Asia, the Indian subcontinent and East Asia.

There was no one Silk Route, but many routes, roads, and paths that headed in an east-west direction.  The route was mainly comprised of three parent routes as follows:

The “Oasis Route”, connected the caravan cities in the desert and semi-desert areas of Central Asia. This was the most popular route not only because of its historical significance in terms of East-West trade and cultural exchange, but also because it attracted people mainly because this route evolved through consistent human efforts, with countless people traveling along this route over thousands of years. The terminals of the Oasis Route were Changan (Xian) in the East and Rome in the West; and later on Luayang in the East and Byzantium (Constantinople) in the West.

The route crossed many hazardous regions such as the TaklaMakan desert, the Tien Shan and Kunlun Shan, the Pamirs, the Karakum and Kyzylkum deserts, and the Hindu Kush.

The 4,000 kms long section of the Oasis Silk Route that ran through East and West Turkistan was located in the heart of Asia. The caravan city states along the Oasis Route maintained accommodation and market facilities for caravans and travelers.

The "Steppe Route", the commercial route controlled by nomadic tribes who lived in the Eurasian steppe region extending to the north of the Oasis Route. This was the second important constituent of the Silk Route. It had been used by nomads when they moved from east to west or vice-versa. They used this route for securing fodder for their cattle. The Steppe Route originated from the migration of nomadic cattle raising tribes in the pre-historic age.

The Steppe Route was not a road but it was a continuation of plains from east to west which served as an artery of traffic in Northern Eurasia. It was a convenient artery for nomadic equestrian tribes for migrating in any direction and to breed cattle or trade at various locations. The Steppe Route was itself a fertile pasturage and also a stage of military activities.

The "Southern Sea Route", linked the China Sea, the Indian Ocean, the Arabian Sea, the Red Sea and the Mediterranean. Southern Sea Route started from the Southern cost of China in of Kuangchou (Canton), rounding the peninsula of Indo-China, through the Malacca Straits and up to the mouth of the Ganga.

Alignment of the Silk Route

The Great Silk Route spanned half the then known world. It started from Changan, which is today's Xian and was the capital of China during Chi, Han, Sui and Tang dynasties. Passing through Kansu, the principal route bifurcated at Anxi near Dun Huang.

Sericulture or silk production has a long and colorful history unknown to most people. For centuries the West knew very little about silk and the people who made it. For more than two thousand years the Chinese kept the secret of silk altogether to themselves. In 8th century B.C., Lei-tsu, the queen of the legendary Chinese Emperor Huang-ti, invented the basic methods of weaving and embroidering with silk thread.

The Silk Route had a rich heritage since its inception and was an early example of political and cultural integration due to inter-regional trade. It sustained an international culture that brought together groups as diverse as the Magyars, Armenians and Chinese and encouraged them to integrate, and helped spread new products and, even more importantly, new ideas. The Silk Route has benefitted all the regions equally and helped in setting up of common and mutual relationship in lieu of economy.