The Economic Survey 2020-21 has made relevant observations about the increasing pace of urbanization in India. In the process, it has highlighted the several associated challenges with such rapid urbanization and also given a glimpse of the various steps that the government is taking to overcome such challenges.

Urbanization in India has become an important and irreversible process, and it is an important determinant of national economic growth and poverty reduction. Its extent can be understood by the following points:

The urban centres are the major engines of economic growth in the country contributing to two-thirds of the country’s economic output and are the main recipients of FDI. 70% of future employment is expected to be generated in Indian cities, with emerging cities driving consumption expenditure.

Is everything fine concerning India’s urbanisation? PERHAPS NOT!

Urbanisation in India has been characterised with many negative aspects. Some of the worrying concerns can be seen as follows:

What is being done to overcome these challenges?

The Ministry of Housing and Urban Affairs (MoHUA) has taken extensive steps to address the problems of urbanisation in India and take advantage of the opportunities provided by the cities. The ministry has devised a three-level strategy for the same: 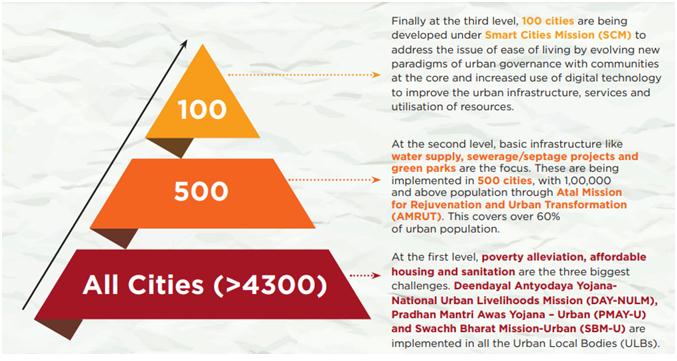 Specific Steps Taken Catering to the Needs of Urban Population in India: 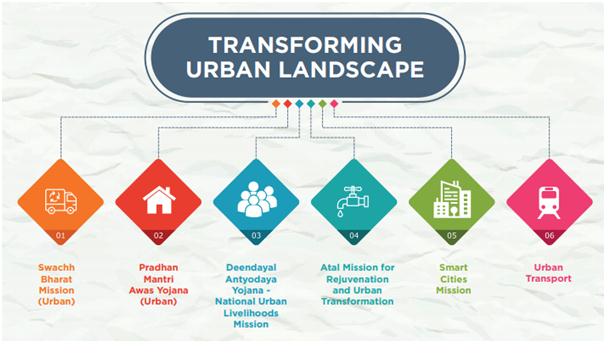 (2)Pradhan Mantri Awas Yojana (Urban)- Launched in 2015, the Mission aims to ensure ‘Housing for All’ in urban areas. The Mission provides central assistance to implementing agencies through States/Union Territories (UTs) and Central Nodal Agencies (CNAs) for providing houses to all eligible families/ beneficiaries

(4) Atal Mission for Rejuvenation and Urban Transformation (AMRUT)- AMRUT was launched in 2015 with the following objectives:

(5)Smart Cities Mission (SCM)-Launched in 2015, is one of the most transformational urban missions. The objective of the Mission is to strengthen urban infrastructure through the application of smart solutions and provide a better quality of life to citizens.
A total of 100 cities are being developed under the SCM characterised by modern features like:

(6) Urban Transport- There is an urgent need to conserve energy and land, control pollution and greenhouse gas emissions. Urban transport is a solution to these issues. Hence, planning and management of Urban Transport services and infrastructure require immediate attention.

These multi-dimensional steps are undertaken in the right direction to alleviate issues related to urbanization in India. Urbanization is here to stay and increase rapidly, it is important to keep up the pace with the phenomenon and provide all the basic amenities to cater to the needs of the increasingly urban population. If both these things go hand-in-hand, the country can experience substantial economic growth and significant enhancement of the standards of living of the people.