India is among the world’s most water-stressed countries and this water scarcity will become more and more severe with time. As per the NITI Ayog report published in 2018, the per capita water availability is set to decline to 1,465 cubic metres by 2025 from 1,544 m3 in 2011. With both the population of India and its industrial landscape increasing at a phenomenal speed, wastewater volume is also at an alarming rise. The exponentialpopulation increase, rapid urbanisation, and fast industrialisationis all putting pressure on water resources and increasing the unregulated, untreated, and illegal discharge of contaminated water. This presents a threat to the health and wellbeing of Indian citizens.

The two main sources of water contamination are sewage and industrial waste. India generates a staggering 1.7 million tonnes of faecal waste a day. Official figures show that 78% of the sewage generated remains untreated and is disposed of in rivers, groundwater, lakes and oceans. On an average, high-income countries treat about 70 per cent of the wastewater they generate while that ratio dropped to 38 per cent in upper middle-income countries and to 28 per cent in lower middle-income countries.In developing countries, each person produces, on average, six litres of toilet wastewater each day. Based on the number of people who don’t have access to safe sanitation, that equates to nearly 14 billion litres of untreated faecal contaminated wastewater created each day. Thus, it is clear that future demands for water cannot be met unless wastewater management is revolutionised.

Process of Wastewater Treatment: An overview 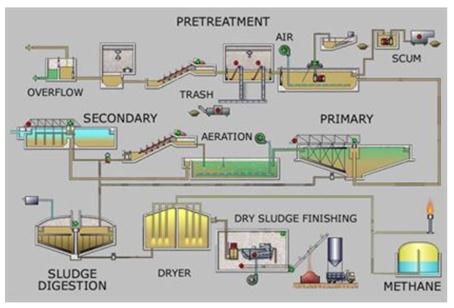 After the biological treatment, the sludge is pumped from the treatment plant into a large tank. This large tank consists of anaerobic bacteria which lead to the digestion of sludge. During digestion, biogas is produced and it is used as an energy source. Hence, Sewage treatment plant design and sewage management play a crucial role in the maintenance of human welfare.

Water and Habitat Contamination: The most immediate effect of wastewater on the environment is when it contributes toward the contamination and destruction of natural habitats and the wildlife that live in those habitats by exposing them to harmful chemicals. For example, the impact of waste water on the coral reefs is quite alarming. Many of the individual agents found within sewage, specifically freshwater, inorganic nutrients, pathogens, endocrine disrupters, suspended solids, sediments, and heavy metals, can severely impair coral growth and/or reproduction.

Eutrophication: It is a natural phenomenon where over a span of millennia, ageing of lake or terrestrial water body occurs as a result of accumulation of mineral and organic matter and eventually it gets filled and dried up. The waste water discharge from households, industry and agricultural field accelerates this phenomenon and greatly impact the natural habitation of the water body. The artificial eutrophication causes algal bloom, new species invasion, death of aquatic life. It is also leading to the creation of Dead Zones, where nutrient enrichment causes extreme hypoxia, among the coastal region across the globe. E.g., The Dead zone of Gulf of Oman.

Effect on the Human Health:Wastewater is one of the worst sources and carriers of diseases. According to a WHO report, more than 3.4 million people die each year from a waterborne disease.Domestic and hospital sewage contain many undesirable pathogenic microorganisms, and its disposal into water without proper treatment may cause an outbreak of serious diseases, such as typhoid, cholera, etc.Metals like lead, zinc, arsenic, copper, mercury and cadmium in industrial wastewaters adversely affect humans and other animals.Consumption of such arsenic polluted water leads to accumulation of arsenic in the body parts like blood, nails and hairs causing skin lesions, rough skin, dry and thickening of the skin and ultimately skin cancer.Mercury compounds in wastewater are converted by bacterial action into extremely toxic methyl mercury, which can cause numbness of limbs, lips and tongue, deafness, blurring of vision and mental derangement. Mercury contamination causes Minamata (neurological syndrome) disease in humans.Lead causes lead poisoning that includes anaemia, headache, loss of muscle power and bluish line around the gum.Water contaminated with cadmium can cause itaiitai disease also called ouch-ouch disease (a painful disease of bones and joints) and cancer of lungs and liver.

Effect on the Agriculture:Agricultural policies have not sufficiently addressed the inherent threats posed by the use of untreated waste water for irrigation. Often, hazardous materials in the form of heavy metals, organic contaminants, pathogens or antibiotic-resistant bacteria can be found in waste water. These accumulate in soils, crops and groundwater and so pass into the food chain. Today, waste water irrigates between 1.5% and 6.6% of farmland worldwide; about 10% of world’s food is produced using the practice.

How to mitigate the challenge?

Ecological Sanitation (Ecosan): Ecosan is a concept that treats various types of waste generated by humans as a resource, which can be safely collected, treated and reused to prevent pollution of water bodies and the environment. E.g., Ecosan toilets, compost pit, biogas plants, reed-beds for treatment of wastewater.

Wastewater as resourcenot liability: The 2017 edition of the United Nations World Water Development Report (WWDR) explored the issue of wastewater and its potential as a sustainable resource.Wastewater should be considered a resource whose effective management is essential for future water security. As per the principle of Circular Economy, argued by NITI ayog, a paradigm shift from ‘use and throw’ to a ‘use, treat, and reuse’ approach is needed.

Wastewater is one of the most under-exploited resources we have. It is a valuable resource from which energy, water, organics, phosphates, nitrogen, cellulose, rare earths and other resources can be extracted.Increasingly, technologies are making resource recovery from wastewater commercially feasible, including in bio-gas, fertilisers, paper, metals and plastics.Wastewater, most importantly, is a source of ‘new’ water, thus having the potential to mature as a profitable intervention.

Wetlands and Mangrove as Filters:Wetland systems and mangrove are ecosystems that can be used for improving water quality, whether it relates to wastewater, ground water, industrial waste streams, or diffuse pollution; and can be implemented in urban, peri-urban, and agricultural landscapes.  Wetland and mangroves have been shown to be one of the most efficient and cost-effective methods for improving water quality while providing added value to the landscape.  Wetland systems and Mangroves simultaneously offer many advantages such as increased local biodiversity and the creation of green space within urban areas.

Legal framework:Robust implementation of the Legal provisions are a must. Supreme court has also declared under article 21 that right to decent environment including pollution free water and airand protection against hazardous industries is Fundamental Right. Currently following legal mechanism for Waste-water Regulation exists in India:

The Water (Prevention and Control of Pollution) Cess Act, 1977, amended 2003:This Act binds consumers who are carrying on an industry that falls within the provisions to affix meters for the purpose of assessing the quantity of water used in the act.Industries also have to include operations or processes or treatment and disposal systems which consume water or give rise to sewage effluent.

Wastewater Pricing: Recycle and reuse of water, after treatment to specified standards, should also be incentivized through a properly planned tariff system.

Initiative taken to reduce the Impact of Waste Water:

Improving clean water and sanitation have clear global targets. Goal 6 of the United Nation’s sustainable development goals is to, by 2030, achieve adequate and equitable sanitation for all and to halve the proportion of untreated wastewater. As a responsible nation and welfare state it is mandatory that all the targets that we aspire must be fulfilled with a simultaneous welfare of citizens of India. In this regard, adoption of strategies like environmental taxes, pollution levies, polluter pay principle and circular approach (use, treat, reuse) to manage wastewater is necessary. Strict legal and regulatory framework to regulate and treatment of industrial waste should be done effectively. NITI Aayog water regulatory framework for wastewater management should be established in all states firmed timelines for implementation. The public-private Partnership should be encouraged to full fill the financial and technological constraints in the waste water recycling industries. And importantly, we need a co-ordinated investment in sustainable sanitation solutions from all stakeholders, especially governments, international organisations and the private sector. This is essential to both protect the health of our own species and all other living things.